I am currently about ten thousand words into my novel, which has a current working title of Sadie Fights Back.” I have absolutely no idea if it is even close to what the story will eventually be called. It is a fictional story based upon events that can and do take place in the life of a nurse mare.


As a part, of my research into writing a story from the perspective of an animal. I read a series of books written by some of the best. Two of them were written by Jack London. They were Call of the Wild and White Fang. I enjoyed both books, and they both gave me an insight into not only writing from the perspective of an animal, but what might happen in the mind and life of a wolf or wild dog.


It also tells how the cruelty of man can affect the life of animals. Not only do they have to face the challenges of nature, and other predators. They also in many cases face the indifference of men, who consider them expendable and sometimes use them in brutal ways. Making them insane beasts, that in many cases destroys their sanity.


White Fang was one such animal. Part wolf, part dog, he was first raised as a wolf, then he begins his life in the world of man to be used and abused by both animal and human.


In part of his story I wept, cringed, and feared for his life, as a man called Beauty turned him into a fighting dog. Treating him with the utmost cruelty until his life was nothing, but kill or be killed. He was turned into a wild beast that would frighten anyone. It reminded me that in this day and age, we still have similar people and similar events, dogs are still used as entertainment for evil men whose only interest is watching blood sport.


Will, White Fang find anyone, be it man or beast that he can love and will love him? That is the question that only someone who reads this excellent book can learn.


It was originally written as a book for younger boys, yet in today’s world it would be considered to brutal and to mature a book by many. It is a book that I believe everyone should read who wants to learn about books, animals, and the cruelty that our actions can cause. 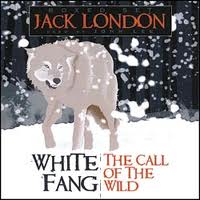 I fell in love with White Fang and will never forget him or Jack London’s excellent writing.
Posted by MartaWrites at 9:41 AM No comments:

Wee Three: A Mother's Love in Verse, has undergone a publisher change and is available as an expanded edition entitled Wee Three: A Child's World.

Both the paperback and the ebook are priced a bit lower to match todays economy.
Posted by MartaWrites at 3:58 AM No comments:

Promote Your Page Too

Email us with any questions, or comments.moranbishop@comcast.net